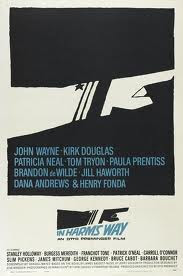 Following the Japanese attack on Pearl Harbor Captain Rockwell Torrey takes a convoy in harm's way to supply US Naval forces and Marines battling the enemy, and later participates in Operation Skyhook, an offensive to secure an island to support air operations in the South Pacific. Complicating matters are unresolved issues with his estranged son, Jeremiah, a young snot-nosed ensign; his unreliable executive office, Commander Eddington; an incompetent congressman and ambitious admiral; and a nurse named Maggie.

Director Otto Preminger's best 1960's film and with one of John Wayne's finest performances, In Harm's Way is a satisfying World War II naval story that rises above its melodramatic subplots. As Torrey, Wayne's understated acting works perfectly with Patricia Neal, as nurse Maggie, and with Burgess Meredith, a reserve naval intelligence officer and roommate.

The best moments involve Wayne and Neal, whose scenes are wonderful, feeling authentic and natural for two people attracted to one another but with little time to act as the war calls them to duty. They develop an instant liking for one another and their conversations are to the point, honest, and filled with friendly ribbing. Maggie sizes up Torrey right away, telling her roommate: Annalee dear, past a certain age, men are apt to avoid making sudden moves where women are concerned. The women have to do the sudden moving, or else everybody stands still until it's too late. It gets late fast in these times. I like this man, and I want him to know it - now.

﻿
When they meet later in the film, after Torrey is promoted, they have this exchange:

Nurse Maggie: How do admirals feel about nurses?
Rear Admiral Torrey: The same way captains did.

Wendell Mayes wrote the screenplay, which seems pitch perfect for the couple. Mayes was good at adapting best-selling novels to the screen, having worked with Preminger before on Anatomy of a Murder and Advise and Consent. With the exception of the character of Eddington (Kirk Douglas), the writing is strongest part of the film.

The film opens with an officers' dance. Preminger unnecessarily lets you know it's December 6th, 1941 by showing the date on a chalk board as the camera pans the revelers. A tipsy woman dances provocatively before being led away by an officer who is not her husband. The couple make love on the beach before falling asleep. It, like other sexual encounters in the film, appear off-screen as Preminger relies on the power of suggestion.

The Japanese attack occurs the next morning, and while trying to drive back to his duty station, the officer and woman are killed in a car accident. We later learn that the woman is Commander Eddington's wife. Eddington (Kirk Douglas) is Torrey's right-hand man, and throughout the film, Torrey rescues the troubled officer from various self-induced scrapes. He doesn't handle his wife's infidelity well and likes to drink too much. Douglas' performance is fine, but the character is all over the place. Toward the end he inexplicably rapes a young nurse, a crime for which he seeks redemption by flying a suicide mission to locate an enemy fleet. His fiery death is well done, and not regretted by the audience. In any case, the rascal is far from admirable and it stretches belief that a by-the-book Navy man like Torrey would have kept him on staff.


Not long on action until the end, Preminger does a nice job of spicing the film with behind-the-scenes operations to give a flavor of authenticity, demonstrating the importance of support work for the ships and soldiers on the front line: plane and coastal spotters, reconnaissance, intelligence briefings, field hospitals. There's a good sequence showing how officers communicated between ships using megaphones. In one quiet moment Wayne displays some subtle acting, informing a wife that her husband is missing. You can see by his face that it's hard on him too, a duty that no officer wants. Wayne's haggard features works especially well here. Already suffering from the cancer that would soon cost him a lung, he looks tired and older than his 58 years.

Wayne would undergo cancer surgery within weeks of the rapping up production on the film. Like his character in In Harms Way, who Admiral Nimitz astutely observes is a hard man to kill, he wouldn't miss a beat, staring work on his next film within months. Neal wasn't so lucky. She'd suffer a series of life-threatening strokes shortly after this film's release and not re-appear in a film until The Subject Was Roses, three years later. Her absence from acting was the audience's loss.

Douglas gets the best line. Torrey's son understandably resents the father who dropped out of his life eighteen years earlier. He's tagging along with a jerky congressman who's using the Navy to further his political career, and secretly funneling information to Torrey's nominal superior, Admiral Broderick (Dana Andrews), an incompetent officer and rival. Douglas warns the ensign to steer clear of  the congressman. When the boy takes offense at Eddington's opinion of the congressman, Eddington retorts: Well , I'm afraid I cannot accept you as Rock Torrey's son. I think somebody got in there ahead of him.

Wayne gets a good one too: All battles are fought by scared men who'd rather be someplace else.

Proof that there are only so many variations of plot in Hollywood and novels, the film is reminiscent of two earlier Wayne films: the relationship of father and estranged son is similar to that depicted in the 1950 Western Rio Grande; and PT boat duty was the focus of the 1945's They Were Expendable, though there Wayne himself served on the boats; here it is Jerr, the son.

Much has been made of the large-scale models used for battle scenes. I didn't find them distracting, though it's odd in some silhouetted ship close-ups that no sailors are seen on deck. Explosions and smoke are dramatic, and you get a good feel for the power of big Naval guns.

The great Saul Bass did the title work, whose poster is shown above, a Naval officer's arm pointing toward the enemy. Preminger made an interesting decision to place the titles at the end of the film rather than the beginning. And with Jerry Goldsmith's rousing score as a compliment (here's a link to a small part), it is wonderfully effective. The film closes with Wayne lying wounded on a hospital ship, tended by Maggie. The screen fades to black before waves washing ashore appear, which grow steadily more violent until they meld into explosions, ultimately into an atomic bomb mushroom cloud, and finally, back to a gentle tide coming in on a beach. The sequence represents the War in the Pacific.

Henry Fonda makes a fine appearance as Admiral Nimitz. If there was ever a better actor for such a part, I haven't seen him. Fonda reeks of authority and military bearing. His accent seems a little off though; Nimitz was from Texas. Fonda's heavy drawl seems more apt to Georgia.

Loyal Griggs served as cinematographer and earned the film's only Oscar nomination for his fine black and white work. He had an odd career, with some terrific films to his credit and some cheese sprinkled throughout. He won an Oscar for his esquisite work on Shane and was nominated for The Ten Commandments. But he also handled the camera for three Elvis Presley features.
Posted by readerman at 6:03 AM 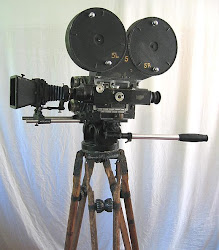 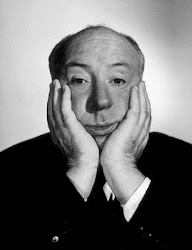